A few weeks ago Domino’s Pizza announced that they introduced conversational AI capabilities in their ordering process to enhance the customer experience. DRU Assist, a Virtual Assistant that is powered by Nuance Technology’s Nina Intelligent Virtual Assistant technology.

The doubts I expressed earlier are still there but then I am happy to be convinced otherwise.

Domino’s managed a tremendous turnaround after having some serious issues late in the aughties and early tens. Apart from rediscovering quality they implemented a very strong technology strategy that helps them understanding their customers better and helps their customers to a pretty smooth ordering and delivery process.

So, I took the chance to have a conversation with Nuance’s Robert Schwarz about DRU assist, and of course ordered some Pizza using DRU shortly after it came online in New Zealand. Having some Pizza-loving children and a busy lifestyle I am a frequent mobile customer of Domino’s (and no, they didn’t incentivize me for this article in any form).

Unluckily I couldn’t get statements from Domino’s, but here we are …

Nuance as a vendor has a long history in speech-based interfaces. According to Mr. Schwarz Nina, the Nuance technology behind DRU Assist is really good at clarifying intent and that in a human way. It is their core business. This might have been part of the argument that convinced Domino’s to go with Nuance instead of e.g. Microsoft’s Cortana. After all Domino’s Australia is a reference account for Microsoft, so the ties are there.

Right now DRU ‘lives’ on the Domino’s (Australia and NZ) web site and the corresponding app and is easily engaged with a simple click or tap. The technology itself can integrate with Facebook Messenger, Whatsapp, WeChat etc but this is currently not done and there doesn’t seem to be a plan. Amazon’s Alexa, on the other hand is – but then Alexa isn’t available in Australia and NZ at the moment.

DRU Assist offers the ability in a conversational way, via text or voice. It is supposed to be able to follow a step-by-step approach as well as a customer-driven one-stop order. This is a pretty tall order, given there are dozens of different pizzas and sides, many locations and different delivery methods that need to get clarified. To support this DRU Assist is implemented using a dynamic decision tree with some learning capabilities. According to Schwarz they haven’t hit the limits of the tree approach yet, but there is a fallback to the ‘old style’ ordering process in case the Virtual Assistant gets stuck, as it is fully based upon the existing order basket. Domino’s want to offer their customers to interact with them the “way they are used to”, also with the thought that this will give a lot more insight for them to improve their services and offerings.

This all sounds good and well, although I am suspicious of the decision tree approach.

Now How Does it Pan Out?

So, let’s get some pizza – the kids are hungry! And I am, too. As we are 5 persons with different tastes it will not be a small order … so let’s get the phone and call DRU. 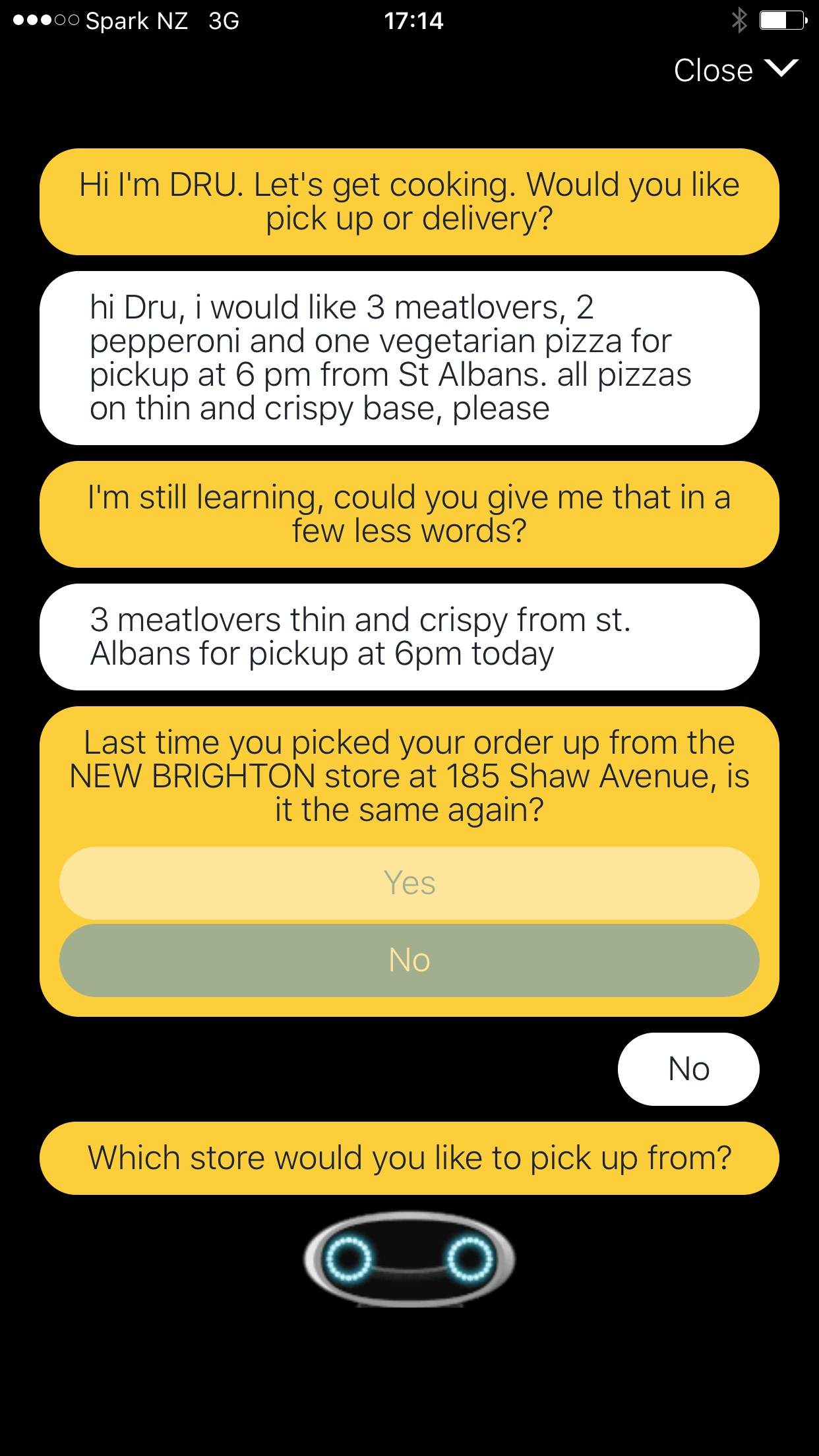 I know what I want, and from where, and how, so give it a shot: 3 Meatlover Pizzas, 2 Pepperoni Pizzas, and one vegetarian one, all on a thin and crispy base, to pick up at 6 pm in a store of my choice.

“I am still learning” – there goes the one-shot experience, but then DRU just got introduced, so accepted. Let’s start with the first group of pizzas.

To add some spice I did not choose the store that I used the time before and sure enough DRU picks up on that. But why assuming that I took the wrong place, just because last time I went to the New Brighton place? So, no, it is not that place.

St. Albans it is instead, as written before, but this time deliberately without capitalization.

Now I have one BBQ Meatlovers pizza, as the full name of the pizza is.

Why only one? I asked for three.

So, what I clearly like to do is change the order to make it three pizzas.

Which is easily achieved.

So far so good. Now, let’s go on with the additional pizzas. This time I would like to go for something else, namely the two pepperoni pizzas of my original full order. 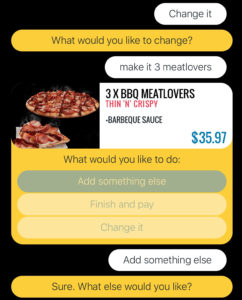 Sadly DRU seems to have a challenge with numbers. Again it adds only one more pizza to the basket. The base is again correct, though.

This time I choose the something else option and simply ask to add a pepperoni pizza on a thin and crispy base.

From here on I have another challenge in mind. Knowing that there are several vegetarian options – let’s ask for what is available.

So: “Do you have vegetarian pizza?”

But why do I now get prompted with a menu of types? I just gave the type of pizza I want. 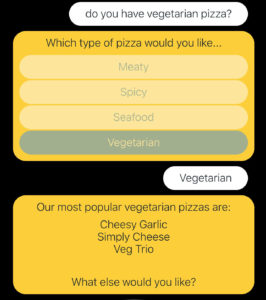 Never mind … vegetarian it is.

The reply to this is interesting. It gives a selection of the most popular vegetarian options, which indicates that there are more options.

Because the pizza that I do have in mind does not appear in this shortlist. 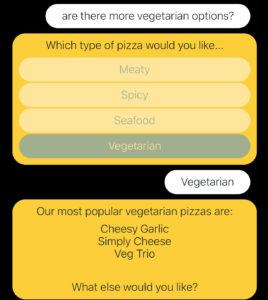 Now this flow is not exactly what I would have expected.

DRU leads me back through the same options, giving me the same result.

Well, then I just go for the Veg Trio, which comes at a loss of revenue to Domino’s as the one that I actually had in mind is significantly more expensive.

The payment process gets handed over to the well-known process. So there are no surprises there.

After this order I briefly tried the voice interface. After all this is where the real juice of a conversational interface is. With all the accents and dialects – I for one have a strong German accent in my English – this is an immense challenge.

Sincerely DRU didn’t even get the store (I tried the New Brighton one) and fell back to the normal app after some attempts. This is clearly something that I will try again.

A friend of mine tried to add some mushrooms to a pizza and failed with that.

In brief: I feel confirmed in my suspicions. The ordering process was not where I would have liked to have it be. There is some rigidity in the process that just doesn’t need to be there anymore when engaged in a conversation – like insisting to get store and delivery mode up front; and then there are some more kinks in the process that should get weeded out.

In my eyes the biggest advantage that the conversational interface has comes to play when the customers about know what they want to order and can bypass the catalog, especially when ordering on a mobile with its limited screen real estate. This makes situations like the order string being too long to be parsed (understood) or the consistent error with getting the number of ordered pizzas wrong difficult to understand. These are table stakes – especially the latter. The same holds true in the situation of asking for options. When asked for vegetarian options the system should not prompt back a number of possible options, especially not if the one that it got asked for is included.

Overall this seems to be nothing that cannot be overcome by further/better/re- training of the underlying decision tree model. Consequently, I expect some improvement over time, also in the area of voice recognition. After all Nuance is one of the leading players in this arena.

So far, I am not impressed by the offered experience and am looking forward to repeating the experiment.