Back in 2012 thought leader Esteban Kolsky went through the 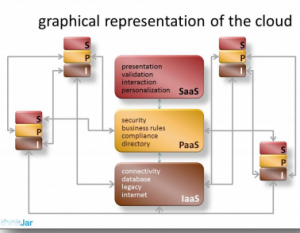 Graphical Representation of the Cloud by Esteban Kolsky

efforts of defining a pure, open cloud architecture with its three constituting layers: SaaS, PaaS, and IaaS, and samples of their interactions. A core focus lies on how an open cloud model solves the issues of security, scalability, and integration. Esteban also makes it abundantly clear that it can easily take 10 to 15 years to be widely adopted.

First things first: He is right – at least to quite an extent.

Personally I am of the opinion that any open cloud model necessarily includes private, and thus hybrid clouds. I say this while I agree that the panacea is the open model. Private and hybrid models are at least challenged in the security aspect and, to a lesser extent, in the integration challenge with the latter usually being mitigated by maintaining a white list of ‘approved’ applications, technologies, vendors, etc. Scalability shouldn’t be an issue for most companies, given that they work with a data center provider that is worth their salt. The bigger problem of security remains, but here one could argue that it is the same as for non-cloud, on-premise implementations.

To a minimum, private and hybrid clouds have their value as transition steps. In reality it is more. Just take VW implementing a private cloud based upon OpenStack, delivered by Mirantis – which are, interestingly enough, not covered by Forrester Research in their Q1 2016 Wave on Private Cloud Software Suites. But I deviate …

The recent RightScale report on the State of the Cloud tells us that nearly every company uses cloud of some sort. These may only be e-mail services, though. It also tells us that the use of private cloud went up drastically and far faster than the use of public cloud; and with it hybrid cloud, which is also a function of the widespread adoption of public cloud. Have integration between an app on the public cloud and one on the private sided and you are hybrid – and what business can work efficiently, or even effectively without integration?

The State of the Cloud report also shows a slight reduction of multiple private- and single-public cloud strategies with a corresponding increase of multiple-public and single-private cloud strategies, with hybrid cloud strategy staying constant. The latter makes technology advisor Ben Kepes wonder in a recent computerworld post whether this is “an indication of greater move to the public cloud, or simply the last vestiges of conservative companies not willing to move to cloud of any flavor”. I’d like to add another possible interpretation in a second.

Cloud models – wrongly so, I dare to say – are implemented to help companies doing things more efficiently, or to save cost.

Why is this wrong? Because it is shortsighted! Without a further strategic view into business flexibility and business process improvement it will lead at best to short term cost savings and then it is missing out on the opportunity to de-clutter existing business processes and to improve them. The real benefits of a move into a cloud model come with revisiting and streamlining business processes as part of moving ‘legacy’ applications into the cloud. A hybrid cloud strategy helps achieving this in a stepwise approach, following the Think Big – Act Small approach that I described for Customer Experience, Customer Engagement and CRM earlier.

Public, Private or Hybrid Cloud? In the Fog

The preference of private cloud seems to be more pronounced in enterprises than in SMBs, which tend to have more of their IT in public clouds – yeah, plural as the average of productively used clouds is 3, with three more being experimented with.

This number of used clouds again emphasizes the importance of integration although I, again, think that this is less of a (technical) problem and more of a logistics one. The problem that I rather see is that every major vendor intends to establish their platform as THE platform in an effort to maximize their own gains; which goes on cost of the customer benefit of cloud, I must add.

This is an attempt that is obviously doomed to fail, not only on a PaaS, but also on an infrastructure level. We will not see all businesses around dumping their Salesforce implementations in favor of SAP, Oracle, or Microsoft (take any other permutation of names here); nor will we see SAP develop an e-mail system that can seriously compete with Google’s. Neither will we see AWS emerging as the sole surviving infrastructure …

We will (continue to) see businesses focusing on value delivered, which will heat up the competition and will have a healthy impact on pricing.

So where are we headed? Public and Private Clouds are here to stay. The smarter of the more conservative companies and the slower adopters will likely use a transition model that involves private and hybrid clouds to improve their business. Businesses will use multiple clouds on different (PaaS, IaaS) platforms, which will put more emphasis on another IaaS – Integration as a Service.