SAP CRM for S/4HANA – News from the Customer Frontier

It has been a little more than half a year now that I didn’t update on what is going on with SAP CRM and S/4HANA (which I will refer to as S/4 from now on; SAP it is time for you to change the unwieldy name to something more manageable).

What Happened – So Far

As you are well aware SAP is working on integrating a simplified version of SAP CRM into S4. The original roadmap offered a first customer release of an integrated product in early 2018, based on the September 2017 release of S4. The integration was planned as an add-on to S4. The initial scope of this CRM add on for S/4 was supposed to cover what is referred to as ‘core service’ functionality. This initial release shall be followed by ‘core sales’ functionality later in 2018. 2019 then is supposed to be dedicated to another round-off release covering further sales and service functionality, including loyalty management and migration tools.

Roadmap and statements also so far have been fairly fuzzy about the strategic distinction between CRM as a part of S4 and the SAP Hybris line of CRM- and CEM systems.

What does the Future have in its Basket?

As it seems now, the release is not going to happen as fast as planned, nor in the originally planned way.

Instead, in a webinar recently held for partners, SAP ‘announced’ two very interesting changes, with the second one likely also being a consequence of the first one.

SAP CRM will no more be referred to as an add-on to S/4 but, at least for the service functionality, as ‘SAP S/4HANA for Customer Management’. Given this, first the Service portion of SAP CRM, then its Sales portion, will formally become a part of S/4. CRM Marketing will be phased out and be replaced by SAP Hybris Marketing. This is nothing new, though.

Regarding the first release, SAP now talks about H2, 2018. It appears that the difficulties of integrating two complex (and different) pieces of software into something consistent are higher than originally anticipated. Merging them, instead of merely delivering an add-on, surely has added to this complexity.

The ‘Sales Core’ that is to follow the Service Core is still scheduled for 2018.

This sequence still makes a lot of sense, as S4 is very light on customer service functionality. This can also be seen in the sources of the business object models that make up the joint solution. Also, the addition of the CRM Interaction Center is a good choice, although this will have other implications when thinking of the SAP Hybris Engagement Center. More about this a little later.

SAP essentially chose to use the transactional objects out of CRM and to ‘marry’ them with the S4 varieties of the master type of objects – with the prominent exception of the business partner, which will have its origins in CRM. This exception is hardly surprising as the CRM Business Partner is far superior to the original ERP Business Partner. This is referred to as ‘using the best of two worlds’, something I would not contradict to.

This theme continues in the sales world, where also the ERP based S4 functionality is stronger than in the service portion. Additionally, it can be argued that order fulfillment is a core ERP job. There, in any case, is no need for having two different object models in the same system. The two interesting aspects here are the choice of a CRM based org model and the addition of a loyalty component into S/4, especially since Loyalty Management is a classic candidate for an engine and as there is a competing, though with lower capabilities, loyalty management engine in YaaS.

The majority of other CRM engines and frameworks, like pricing, configuration, extensibility, reporting, etc. will be replaced by their respective S/4 / ERP counterparts or be made part of external engines.

All in all the CRM for S/4 picture is rounding off.

However, there are a number of remaining questions that SAP needs to be able to answer in order to give customers further confidence. These questions include:

This seems reasonably straightforward and consistent especially on the S/4 vs. SAP Hybris side, but still is very high level.

In the case of Customer Service SAP’s conceptual implementation of this vision looks like the diagram below.

Personally, I think that this distinction of three tiers is unnecessary as both, omni-channel service engagement and field service have customer engagement and operations facets, but let’s go with it for time being. 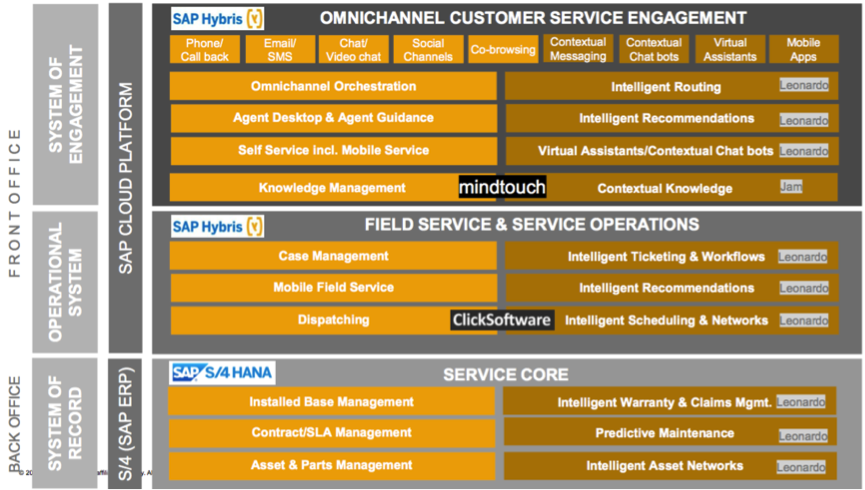 This differentiation seems to make quite some sense on the outset and is a refinement of an older diagram. However, the devil is in the details.

An important part of this devil is that this vision falsely suggests that the system of engagement is actually on top of the operational system, therefore mixing high volume low-touch service and low volume high-touch service. It also suggests that service tickets require a Cloud for Service implementation in addition to the (omni-channel) Customer Engagement Center.

Which is plain wrong.

For example, both systems offer a service ticket, albeit the service ticket in Cloud for Customer needs – and offers – more functionality.

Instead the Cloud for Service will concentrate on being a “market-leading field service management solution including superior mobile experience & advanced scheduling (w/ ClickService)”, while the engagement center will focus on automated and agent based customer service.

Both solutions are supported by SAP Leonardo-based machine learning.

And here comes the catch again.

SAP offers a Service Ticket Intelligence solution to “automatically categorize incoming service tickets and to provide resolution recommendations for the agents. This allows contact centers to expedite problem resolution and scale with the increase of digital service requests”.

This leads to faster ticket resolution by routing the tickets to the right agents and additionally, by providing solution suggestions, reduces the resolution times. On top of this it frees up the agents to spend more time with customers instead of doing admin or system management tasks.

The net effect of this should be better customer service and increased customer satisfaction as business outcomes.

However, SAP Service Ticket Intelligence comes pre-integrated into SAP Service Cloud, the alleged reason being the number of tickets required for the learning process.

I don’t buy this argument, actually don’t even get it.

This is at best inconsistent and should be changed fast as it also forces SAP Customers to implement an additional and potentially unnecessary system.

The picture is getting clearer.

The differentiation between the old world transactional systems and the systems of engagement is more and more being sorted out. Looking at how SAP proceeds what was CRM becomes part of ERP (S/4) and CEM becomes the new world – Customer Engagement and Commerce and driven by SAP Hybris.

Current questions are more and more on detail level and increasingly on how to combine cloud platform products (SAP Leonardo) and different SAP Hybris solutions efficiently to come to a consistent and customer specific solution. The current problem for customers with this is the functional overlap of the different ‘clouds’ combined with insufficient modularization.

This is where the rework of YaaS could come into the picture. Modularization of the various clouds into ‘Micro’-Services would allow for a seamless recombination of systems that allow for the definition of functional scope according to customer needs as opposed to only offering pre-packaged systems.

In between revisiting the integration strategy of the various components with the goal of minimizing the number of required systems should be of additional help for customers.

SAP-internal one item that the new SAP Hybris chief Alex Atzberger needs to look at is an avoidance of an us vs. them situation between SAP and SAP Hybris. Both parts of the company need to work as seamlessly as the solutions they build. Departmental rivalry will be on customers cost and ultimately harm SAP.