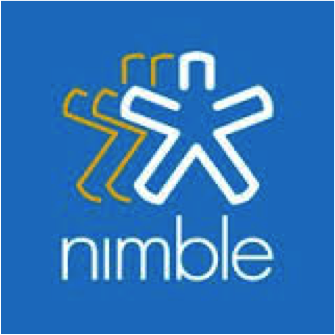 The future of Nimble is blue – Azure blue.

This is not about the colour of hope (which is blue, at least, if you are a German, like me), but about the long pending final migration of Nimble to Azure. The company announced on May 22 that it has successfully migrated its leading SaaS Social Sales application from Amazon Web Services to Azure.

With this move Nimble can now “tap into Microsoft’s world-class Azure platform and partner ecosystem to scale”. According to the press release the company reports that, Microsoft being “a global Nimble reseller, and promoting it as the simple CRM for Office 365, demand for the easy-to-use CRM for small workgroups is surging”.

Then there are two further interesting pieces covered in the press release.

For one: with this move Nimble also “accelerates the delivery of its upcoming 5.0 release using the Azure Platfrom as a Servce (…) and by integrating Common Data Services, Power BI, PowerApps, and Flow”. Nimble 5.0 shall deliver a “company wide team relationship manager that unifies contacts from siloed departments in sales, marketing, customer service, and accounting for Office 365 and G Suite users”. The release of Nimble 5.0 is targeted for June 2019.

Second, Nimble emphasizes on the power of ecosystems by putting a spotlight on Nimble being the only ISV on Microsoft’s CSP Cloud Solution Provider marketplace that uses CSP to build a global distribution channel. Nimble does this by first helping to transform the resellers so they can transform their customers more easily and knowledgeable. “Partners reselling third-party solutions like Nimble with Office 365 can take advantage of solution bundles entirely integrated within Microsoft’s provisioning and transaction system”.

This approach helps resellers to transform from being sellers of products, functions and features, to becoming sellers of business solutions based upon Office 365.

From its origins Nimble is a solution for small businesses that targeted at replacing the Inbox as the company “CRM” system. I put CRM in quotes as the term gets increasingly confused with Sales Force Automation (SFA). Nimble is an SFA system.

But this is not the real point.

The point being that by moving to Azure, Nimble now is prepared to address larger teams, too, and is therefore moving up the ladder a few notches.

At the same time, the CRM market has morphed from an applications market to a platform and ecosystems market with four strong infrastructure players: Alibaba, AWS, Google, Microsoft, in alphabetic order. To read more about what a platform is, refer to my last year’s but still current article. In my Clash of Titans series of posts I have also discussed these four players.

At the same time there are software vendors striving for winning dominance in this platform market. There are the tier one vendors, Microsoft, Oracle, Salesforce, and SAP. I covered these four here and here. And then there are a number of smaller players, notably Zoho and Freshworks that have the ability to undercut and disrupt the tier one vendors as they have the advantage of scaling up from an SMB market as opposed to being in the need to scale down from an enterprise market. And in between we have players like BPM or Pega, to name but two (I apologize to all the other ones that I didn’t mention. Contact me if you are interested).

A strong platform play means being strong on the four dimensions

All these players have recognized these dimensions and have different strengths and weaknesses towards with they are playing their game.

My Analysis and PoV

After this brief detour let’s get back to some more specifics.

As the CRM market has morphed from an applications market to a platform market, the move of Nimble to Azure is a strong case of a win-win-win situation for Microsoft, its channel partners, and of course, Nimble. It provides help for Microsoft in an increasingly saturated enterprise market while a large number of SMBs literally still runs on Excel and E-Mail. Microsoft Dynamics is fairly hard to implement – as every enterprise scale CRM system is. With the help of Nimble the entry barrier goes down by first having a very easy-to-implement system that then can naturally grow into MS Dynamics, e.g. by using a pre-customized version from Nimble.

At the same time, Microsoft becomes a strong player at the lower end of the SMB market by virtue of the ecosystem it created and runs. As Office applications are run throughout the world, this can potentially create a strong barrier for the other players, including the ones that still focus on the SMB market.

As a side effect, Microsoft gets more application load onto Azure, which is the currency of the IaaS market.

Channel partners can grow on two dimensions. At the minimum, they have another arrow in their quiver. But by being smart they can convert themselves from mere tool vendors to business solution vendors by providing bundled solutions that utilize the strength of Azure and important apps like Power BI, PowerApps, Flow, and Common Data Services. By using the software themselves, they can lend credibility to this concept. The beauty of this is, that the ecosystem partners help each other grow, therefore growing the ecosystem as a result. This is a prime example of what makes an ecosystem strong.

With a deep integration into the Office 365 stack and nifty tools like the sidebar that can get used almost anywhere to create or update a Nimble record Nimble has the serious ability to become sticky. It adds immense value to the users and I am constantly surprised that the other vendors do not have something comparable – apart from possible concerns about GDPR-like regulations.

It worked before. As Jon doesn’t get tired to say he is following the same strategy that made his earlier venture Goldmine so successful: Build a solution that users want and integrate it deeply into the Microsoft stack. Grow from there.

I do not see a reason why it should not work again.